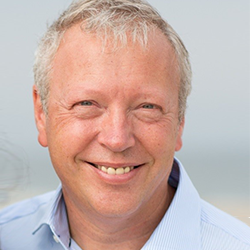 Gert-Jan Gruter specializes in Catalysis, Bio-based chemistry, (bio-based) polymers and sustainability. At Avantium he is responsible for the Renewable Chemistries Business Unit. He has initiated groundbreaking sustainable programs such as the YXY technology to produce FDCA monomer and PEF polyester from sugars; Avantium’s ZAMBEZI biorefinery technology to produce sugars from biomass; MEKONG, the 1-step process to produce ethylene glycol from carbohydrates; and VOLTA, the electrochemical conversion of CO2 to syngas, formic acid, oxalic acid and derivatives, involving the Princeton start-up Liquid Light, which was acquired in 2016.

He joined Avantium in 2000 as Vice President Technology. Since 2004 he has been the Chief Technology Officer. Before Avantium, he was leading a Polyolefins Catalyst Development research group at DSM Research.
In 2014 he was elected ‘European CTO of the year’. Gruter is inventor on more than 100 patents and patent applications. He is author on about 30 scientific papers and book chapters, and member of the innovation and sustainability policy teams of Chemistry branch organization VNCI, member of the core team of APC, a working group that brings together leading R&D managers from the agro-, paper- and chemical industries and several other committees.
He was appointed 1 day per week as extraordinary professor of Industrial Sustainable Chemistry (ISC) at the Van’t Hoff Institute for Molecular Sciences (HIMS) of the University of Amsterdam in 2016. From 1999 to 2006, he was extraordinary professor of Polymer catalysis at the Technische Universiteit Eindhoven.