When the rubber hits the road: IP analysis of eco-friendly car tyres

The automotive industry is going green. Diesel engines, once hailed as the “clean” alternative to petrol, are falling out of favour—so much so that the Society of Motor Manufacturers and Traders (SMMT) reports that diesel car sales fell by 37% in March 2018, compared with March 2017.

PWC predicts that electric and hybrid vehicles will account for 58% of all new car sales in Europe, the USA and China by 2025. But the negative environmental impact of the automotive industry isn’t limited to the fuels which power the vehicles —the manufacturing process itself is extremely resource-intensive. Scientific American reports that it can take 15 to 38 litres of petroleum to produce a single tyre. As well as the significant petroleum content of rubber tyres, most commercially produced tyres contain natural rubber from Hevea Brasiliensis, commonly known as the rubber tree.

The rubber tree is native to rainforests in South America, but importing this raw material from Indonesia, Thailand and Malaysia creates a significant carbon footprint, and represents a serious supply chain risk. In the event of war or natural disaster, some manufacturers could find themselves without a viable supply of natural rubber.

They say necessity is the mother of invention and a glance at the patent data relating to natural rubber reveals a strong current of patent activity. In particular, it seems that many of the major players in the tyre industry are paying close attention to a plant which may give them the ability to source natural rubber in the United States—Guayule, formally known as Parthenium Argentatum, is a flowering shrub which is part of the Aster family.

Patent activity trend
The graph below shows that patent filing activity in relation to Guayule has been growing more or less every year, over the last 20 years—application rates even doubled between 2011 and 2013. Looking at global filing trends, we can see that nearly half (47.7%) of patents filed in this technology space were in the USA—likely the largest market for eco-friendly rubber.

Main Companies:
Firestone, Bridgestone and Sumitomo Rubber Industries are all represented in the list of top 10 patent filers. However, automotive companies looking to get ahead of the competition may be interested in the fact that 5 of the top 10 companies are not direct competitors—and two of them could even be valuable collaborators.

The owner of the largest number of simple families in this technology area, Ceres Inc, is a Californian biotechnology company that develops and produces seeds of genetically modified crops.

By grouping these companies on a 3D patent landscape, we can see that Bridgestone Corp has a cluster of patents (bottom right corner of the diagram below), which focus on ways of increasing guayule’s rubber yield through the application of enzymes to the base of the plant. This cluster of patents is quite separate from those in other major tyre manufacturers’ portfolios. The exception is a handful of patents owned by Goodyear, with whom Bridgestone has recently entered into a joint venture. 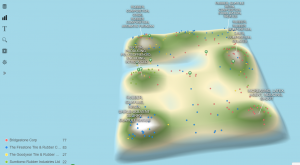 PatSnap’s new synthetic biology innovation report reveals that Danisco, a food company, has some interest in rubber. In fact, its second most highly valued patent in the area of synthetic biology is “US20160281113A1 Compositions and Methods for Producing Isoprene” (valued at $2,550,000)—the rubber tyre company, Goodyear, is a co-assignee.

This adds up since Danisco announced in late 2008 that it would be collaborating with Goodyear to develop a bio-based alternative (“bioisoprene”) for the typically Earth-unfriendly compound, isoprene. The recency of the 2016 patent linked above suggests some organisations with a similar innovation focus to Danisco’s, could find adjacent market opportunities by looking into trends within the Danish company’s overall portfolio. Companies like Michelin (focussed on bio-butadiene), Pirelli (focussed on Guayule) and Cooper Tire (focussed on guayule-based biopolymers) are already blazing trails down the same bio-based route taken by Goodyear.

A Chemscape (chemical patent landscape) analysis of an isoprene search reveals there are many areas of highly valued inventive activity. I’ve identified on the Chemscape some of the main players in this area—Goodyear (red), BASF (blue), Bridgestone (yellow) and Dow (green). The greenish-blue halo at the bottom of the pillar in the centre of the Chemscape, represents our target chemical (isoprene). High-valuation areas are marked with dollar signs.

Aside from the growing interest in the use of bio-based chemicals for tyre production, the other revelation here is the importance of exploring adjacent market opportunities if you’re an innovator working with chemicals.